Titanium dioxide (TiO2) is a semiconductor. Light generates electron-hole pairs on its surface if the energy of the photons is bigger than the band gap Eg (inner photoelectric effect).

In titanium dioxide the electrons or holes can diffuse to the surface and generate radicals. That leads to decomposition of organic substances. Especially the holes have a high oxidative effect. Out of water OH-radicals are formed and organic substances are decomposed by them. In many cases CO2 and water are end products.

The crystalline structure Anatase, which is the most efficient form of photo catalysis has a band gap Eg of TiO2 3.2 eV. This energy has a light-wavelength of ca. 390 nm, so in this unchanged form of TiO2 only ultraviolet light is effective. Nowadays the band gap of Anatase can be reduced by doping of TiO2, so a bigger area of the light spectrum is usable. 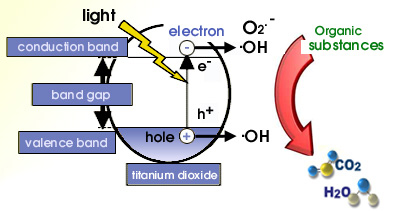 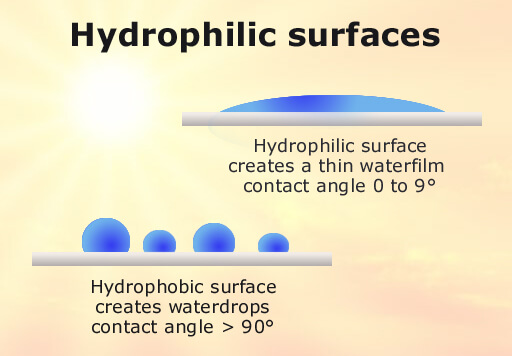 PHOTOKAT Oberflächentechnologie GmbH
Cookies make it easier for us to provide you with our services. With the usage of our services you permit us to use cookies.